"My Horse Has PTSD" - A North State Marine's Survival Tale

My horse has PTSD

"Be polite, be professional but be prepared to kill everyone you meet" 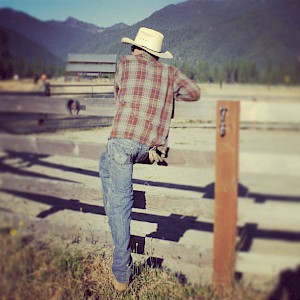 By the time I moved back to Siskiyou County in the fall of 2011, I had been struggling with Post Traumatic Stress for 8 and a half years. I had changed my major in college three times, failed a few classes and struggled through several more. I struggled with alcohol and ended three careers prematurely.

Most recently, I had been a sound engineer in San Diego for one of the top companies in the world. I put rock & roll and country tours together and set the gear for the shows. I got paid to hang out in places you couldn't buy tickets too. It had been a childhood dream to be in the music industry, but the stress of the crowds was too much. Being constantly on guard and waiting for something to happen led to a very unhappy person.

Before that I had worked as a mechanic for a car dealership in Reno. The pay and the hours were good, but I was unable to adapt to that style of work. Having to sell things that weren't always necessary was a drastic change from "do it right because lives depend on it." There wasn't the sense of family and team that I was used to. That career was short lived.

This brings us to the most painful career I had to leave. I enlisted in the United States Marine Corps on December 28, 1998. I was given an all-expense paid trip to sunny San Diego for 13 weeks of pleasure at the lovely Marine Corps Recruit Depot. My timidness was quickly squashed and I thrived. I heard curse words like Moto and lifer. And I liked it. website down . On my 19th birthday, I earned the Eagle Globe and Anchor and the title Marine. 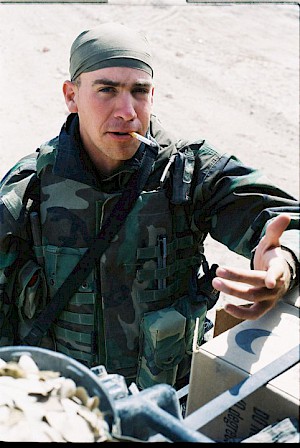 By the time the world changed on September 11th, 2001, I had finished all my schooling and was a Corporal stationed in Yuma, Arizona. I was half-awake when the first reports came across the radio. The second plane got my attention, and the third plane made my blood boil. I learned what hate truly was that day and prayed to be the hand that dealt the just blow.

I transferred to Combat Assault Battalion in Okinawa, Japan, where I was meritoriously promoted to Sergeant. The training was real, and there was no question what was at stake. We were at war. We focused on convoy operations, weapons handling, and a heavy emphasis on Nuclear, Biological and Chemical warfare.

The decision to re-enlist was one of the easiest of my life. On October 1st, 2002, I re-enlisted for orders to 1st Marine Division Camp Pendleton, Ca, and on November 6th forgoing leave I reported to the 1st Marine Regiment HqCo Motor Transport.

Being renamed Regimental Combat Team-1, we sailed from San Diego harbor in January and spent 42 days sailing to Kuwait. Briefings called for amphibious landings, a quick supply and within 72 hours we would be crossing into enemy territory. The next 30 days were the longest 72 hours of my life. Our first morning at the supply area welcomed us with the words "GAS, GAS, GAS": The warning for a chemical attack. No training prepares you for the first time you hear those words for real. I forgot to spit my Copenhagen out and had to sit for what felt like forever not knowing what to do. That became routine and before long we sounded like Darth Vader making mom jokes.

On March 20th, my 23rd birthday, the invasion began. My birthday has become a trigger. "GAS, GAS, GAS" rang out about 15 times that day, and scud missiles were fired at us. I may have cursed and griped at those false alarms, but no one ever missed a beat when the alarm was sounded. To us the threat was very real...and constant.

We battled through Nasseriah, Al Garran, Hayy, across the Tigris and the Euphrates to the eastern side of Baghdad. We watched as the city celebrated and welcomed us. The country was electrified with hope.

We were welcomed home as heroes in June, but by dusk on the 4th of July I knew there was a problem and things weren't ok. The stress of trying to readapt was intense. I was secretly happy to return to the simplicity of combat.

We redeployed to Fallujah in February of 2004. Things had changed. The Improvised Explosive Device has turned everything into potential death. Every guard rail, every post, every pothole. Every carcass, every pile of dirt, every piece of trash was potential death. We were in tin trucks, and all you could do was stare at the dead goat as you drove by in slow motion praying to God today wasn't your day. 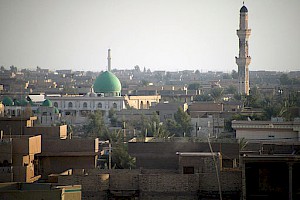 Things went down hill from there. The children had smiled and waved before, but now they threw rocks and had been taught to drop coke cans with grenades on our convoys as we drove under overpasses. Blackwater contractors, brutal heat and sporadic but never ending rocket fire...Fallujah was hell.

Coming home was difficult. Simple trips to the grocery store take me down roads with fresh roadkill and under overpasses with foot traffic. By the time I reach the store I have physical pain from the anxiety, sometimes to the point of being nauseous. And when all is said and done, I rarely complete my list. Its hard to admit I have less fear of enemy fire than grocery shopping.

At Armed Forces Day in 2012, I met Marcia of Stable Hands in Yreka . I was aware of similar equine programs but had balked because I believed I wasn't really that disabled. 10 fingers, 10 toes, 2 eyes, 2 ears and a nose. There was some other vet that needed it more than me. I was wrong. With some gently prodding, I jumped at the chance.

My time with Horses Helping Heroes has been a blessing. The ranch has become a sanctuary where I find peace. From day one the staff and volunteers have been there to help. They only ask we leave feeling better than when we arrive.

The anxiety of trying new things and meeting new people; especially 1000-pound things with minds of their own was a bit overwhelming. The volunteers and staff quickly dispelled my anxiety.

Then they told me I had to groom the horses and tack them, and no, I couldn't just be a passenger, I had to ride them. Like I said, they were there to help and encourage; but they weren't gonna do it for me. The volunteers are vets. Most served during war, some more recent than others, but most importantly as one put it " they are there because they care." It was very humbling to realize that people were giving up their time and going out of their way to provide me an opportunity. Instruction helped tacking become second nature. The staff helped break most of my bad Hollywood habits. And a magical thing happened. I started to regain my confidence. It doesn't matter what you tell a horse, if you lack confidence, the horse will do its own thing.

Even if you tell a horse something completely wrong with confidence it will try, just like a Marine. As my confidence grew I became a more proficient horseman, and I started getting excited. It doesn't matter how bad I feel on Wednesday morning all I have to do is get to the trailer and start grooming. My stress begins melting away before the saddle ever touches the horse's back.

The past year has been both challenging and rewarding. It has been both physically mentally exhausting, but worth every second. I was honored when I was asked to crossover and become a volunteer for Stable Hands. It gave me more time on the ranch and introduced me to a whole new group of people who care. It humbles me to help bring people joy. 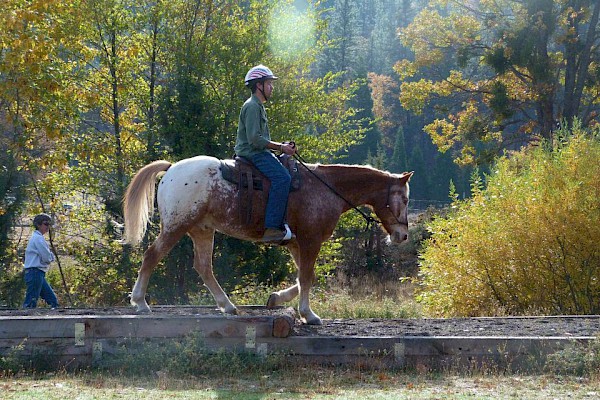 Fall asleep on guard, and the enemy will slit your throat. Horses don't like loud noises, and neither do we. Running up behind a horse is a good way to get kicked. Running up behind a vet...you might find yourself on your back looking at the sky. But most damaging and frustrating, you feel you are never safe, like there is always something wanting to do you harm.

Both groups, vets and horses, have a constant power struggle. Always nipping and biting, fighting for their place in the herd. External threats and internal power struggles forbid showing any sign of weakness or pain.

Horses allow us to climb onto their backs. They choose to allow us to burden them with our weight, but they also dissolve our tension. A good polite horse will carry the most fragile of riders with the utmost care. And like the veterans they carry, they are proud to be of service.

I have always believed that veterans helping veterans was a big part of the answer, but I would not be here today without the horses.

My name is Joseph Sellman. I was a Sergeant in the United States Marine Corps. I am a ten-year survivor of the war in Iraq; and I am a proud participant in the Horses Helping Heroes Program. Thank you for your time and have a good day. 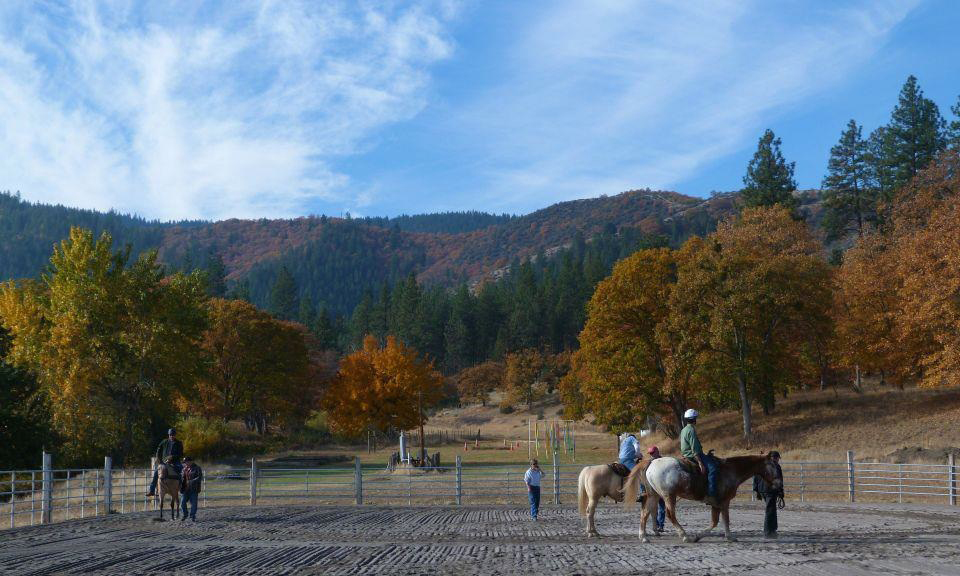 Editor's note: Joseph Sellman is a Klamathon resident who has family in Shasta County. There are local programs similar to Stable Hands at Meliora Ranch and Triple Creek Ranch.

Show You're #SelfieWell and Win $100 in Our Photo Contest!

Danielle: No One's Pain Should Be Compared

Use this RSS Feed to follow our updates in your favorite news reader app!